Since Elliott is in California to prep for his wedding/attend ComiCon, and since Dan was sick for literally a week with some sort of death virus he picked up in Delaware, there’s no new show this week. However, to tide you over, we present this…

The most hyper-verbal of the floppers would like to promote his next film screening at 92Y Tribeca (part of his “Closely Watched Films” series) — John Ford’s The Hurricane.

Out of print on DVD!

Handsome Polynesian native Jon Hall finds himself jailed and trapped in a battle of wills with law and order-obsessed colonial governor Raymond Massey. Desperate to return home, Hall attempts a series of daring but unsuccessful escapes. Just when it seems things can’t get any worse – the hurricane hits.

Directed by John Ford, the great master of American filmmaking and with an all-star cast featuring Dorothy Lamour, Mary Astor and Academy Award-winner Thomas Mitchell, The Hurricane is a glossy, romantic, larger-than-life melodrama so rousing it once caused fistfights to break out among Soviet troops. As exciting and entertaining as it is unabashedly corny, the center piece of the film is a frighteningly realistic hurricane that’s still impressive over 70 years later.

Elliott will discuss the tragic loss of innocent film escapism, where a South Seas adventure fits into the oeuvre of a director best known for John Wayne westerns and whether a movie is racist if the actor playing the Polynesian hero is only half-Tahitian.

Plus! A second movie unavailable on DVD—cut down to 10 minutes so you get only the best parts!

Mr. Mournful Sigh has less to sigh about this week with the publication of his second humor piece at Slate.com. At this rate he’ll be able to quit his day job… whenever Slate stops paying Internet rates and starts paying him screenplay rates. But it’s a funny piece, and you should read it. It’s about Inception. Which is a movie. You like movies, right? I mean, you listen to a movie podcast. So we just figured… OH WHATEVER.

Also, you might enjoy this video, the latest episode of the other wing of his vast Internet empire, the web series 9 AM Meeting:

The dreamboat of the Flop House crew doesn’t have anything in particular to plug, but in the absence of his soothing bass rumble, the ladies might enjoy this glamor photo, shot tastefully from package-level. 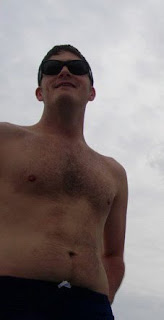