In the absence of a new movie minute this week (and the last several alternate weeks–something which will be addressed in the next full episode) we present a couple of notable non-Flop House projects from the busy Flop House crew.

First off: Elliott has an article in Popular Mechanics! Yes, that Popular Mechanics! The popular one! About mechanics. Check it out HERE. He discusses the 1939 World’s Fair, in his role as a lover of all things old-timey and also futuristic.

Second off: Dan has a new episode of his barely-animated series 9 AM Meeting (illustrated and edited by Dan and starring/written by him and Matt Koff). Watch it below!

And lastly: Stuart isn’t doing anything on the side, other than working hard. But here’s a picture of him as a circus strongman! 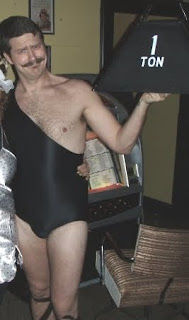