To borrow a line from Patton Oswalt: You like Wolverine? Well, in my movie you get to see Wolverine as a little kid! Meanwhile, Stuart suggests an alternate Wolverine history of the United States, Elliott suggests some novel super-villains, Dan makes Elliott do a spit take, and contest winner Dash has the decency to be a really nice guy and not a serial killer we were foolish enough to let into the apartment.

Thanks again to our contest winner for coming out from New Jersey to Brooklyn to be on the show. He has A PODCAST OF HIS VERY OWN. It’s called “We’re Friends!” Why not check it out? 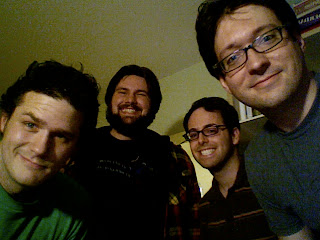 If you live in NYC, then you should come to the launch party for the all-new print humor magazine Whim Quarterly. Dan and Elliott have two pieces each in the inaugural issue, and both will be in attendance – Elliott onstage doing stand-up, and Dan at the bar taking advantage of the discount drinks.